Brazil defeated Uruguay on penalties last night to advance to the Copa America final. The heat and humidity may have kept the game from being the most beautifully played game, but it did not lack in excitement and tension. Brazil twice took the lead against Uruguay, but Uruguay was able to conjure up a response on both occasions.

And as unjust as penalties may be, the also delivered fantastic drama. It took seven rounds to determine the victor, including Sebastian Abreu of Uruguay deciding to chip in a must make penalty. If you haven’t seen this game, I’d recommend finding a way to watch it.

With Uruguay’s loss in Copa America, the nation’s hopes for international glory now rests with its U-20 team, who will face the United States this evening. After an opening draw against South Korea in which the team looked slow, passive and unprepared, the United States has been outstanding in defeating Poland 6-1 and Brazil 2-1. Freddy Adu has reminded us why he was hyped as one of the next big international stars with numerous highlight reel moves and spectacular goals. 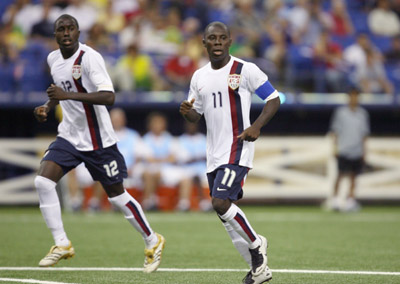 Uruguay enters the knockout stage with significantly less fanfare, especially after a 2-0 defeat to Zambia in the final group stage match. The defeat saw goalkeeper Mauro Goicoechea sent off for professional foul after he committing a ghastly giveaway in his own penalty area.

The replacement goalkeeper for the Uruguayans will face a baptism by fire facing an American attack featuring Adu and Jozy Altidore.